This month the Mayan Garden Club is adding a creative outlet for capturing some of the unique wildlife in our area. If all goes well we might see more of these in the future. This is the inaugural article “Out Your Back Door.” 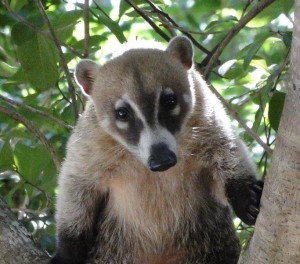 Coatis, also known as the coatimundi, or more commonly known in Mexico as tejón, are native to South America, Central America, and south-western North America.  The Mexican species is the white-nosed coati, Nasua narica, which lives in and around the low- and mid-elevation forests of Oaxaca, Chiapas, Tabasco, Campeche, Yucatan and Quintana Roo states.  The island of Cozumel has its own, slightly smaller subspecies, Nasua narica nelsoni, which is believed to be close to extinction.

Their bodies are 33 to 69 cm (13 to 27 in) long, from head to the base of the tail, which can be as long as their bodies.  Coatis are about 30 cm (12 in) tall at the shoulder, and weigh between 2 and 8 kg (4.4 and 17.6 lb).  Males can become almost twice as large as females and have large, sharp canine teeth.  Coatis have reddish-brown fur, grayish or yellowish shoulders and white muzzle, chin and throat. They resemble the racoon with their “mask” around the eyes and faint rings on the tail.  Unlike raccoons, they are diurnal — active during the day.

Their relative accessibility is part of what makes them so endearing.  You shouldn’t be surprised if you encounter the 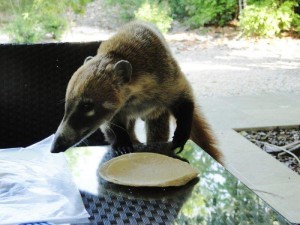 coati in the garden of your resort or at the edge of a vegetated area while out for a walk.  They may even approach your table while you enjoy a meal at an outdoor restaurant or dinner party.

This very intelligent animal shares traits with the racoon, the dog and the monkey.  As a relative of the racoon, the coati shares its curiosity as well as the tendency for snatching food from a table and running away with it.  Like the racoon, the coati has obviously adapted well to humans encroachment of its habitat.  It should not surprise you if a coati follows you around.  Like the dog, he is looking to be fed and given some attention.  The coati is agile and, like the monkey, is just as comfortable on the ground or climbing trees.  It is strongly recommended to NOT feed the coati’s as they can become dependent on human sources of food.

Ashley Smith took the wonderful photos in this article, more are included below. 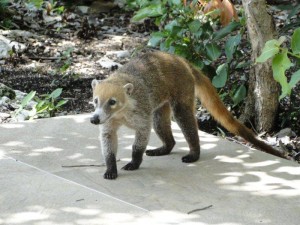 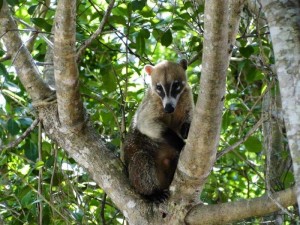 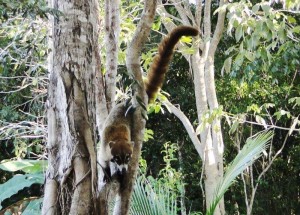 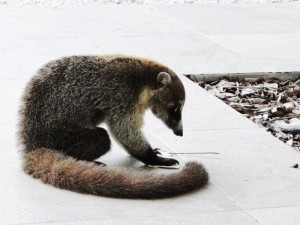 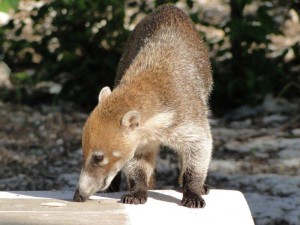 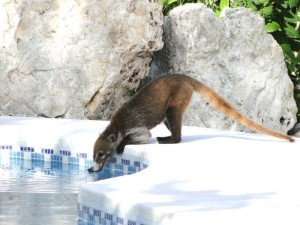