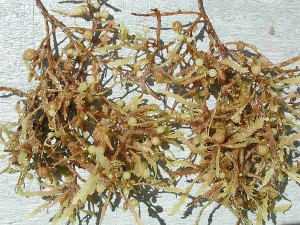 Sargassum – Don’t complain about how it looks, harvest it!

Did you know that the sargassum (sea weed) on the beach is really good fertilizer for your plants? Rake ande just work it into the soil. Farmers in the Bermuda Islands harvest it and use it for all their crops. It is full of nutrients!

What is Sargassum and where does it come from?

The Sargasso Sea is home to seaweed of the genus Sargassum, which floats en masse on the surface there. The sargassum is not a threat to shipping, and historic incidents of sailing ships being trapped there are due to the often calm winds of the horse latitudes.[5]

The Sargasso Sea also plays a major role in the migration of the European eel and the American eel. The larvae of both species hatch there and go to Europe or the East Coast of North America. Later in life, they try to return to the Sargasso Sea to lay eggs. It is also believed that after hatching, young Loggerhead Sea Turtles use currents, such as the Gulf Stream to travel to the Sargasso Sea, where they use the Sargassum as cover from predators until they are mature.

The Sargasso Sea was the subject of a recent metagenomics effort called the Global Ocean Sampling (GOS) survey by J. Craig Venter and others, to evaluate the diversity of microbial life there. The results have indicated that, contrary to previous theories, the area has a wide variety of prokaryotic life.

Commercial fish, such as tuna, and birds also migrate through the Sargasso Sea and depend on it for food.

While all other seas in the world are defined at least in part by land boundaries, the Sargasso Sea is defined only by ocean currents. It lies within the Northern Atlantic Subtropical Gyre. The Gulf Stream establishes the Sargasso Sea’s western boundary, while the Sea is further defined to the north by the North Atlantic Current, to the east by the Canary Current, and to the south by the North Atlantic Equatorial Current. Since this area is defined by boundary currents, its borders are dynamic, correlating roughly with the Azores High Pressure Center for any particular season.