Remember catching these in a jar with holes on the top?  You probably learned the hard and sad way to release them after a few hours.

These are not really “flies” but beetles, members of the family Lampyridae, within the Coleoptera order.  Most lightening bugs are bioluminescent as adults, giving off a cool pale yellow, green, or blue light in intervals.  The light is used to attract a mate,  which occurs primarily during May and June.  Larvae can be found in rotting wood or forest litter, and adults stay in the same general habitat as their larvae.  Fireflies have become endangered due to pesticides and light pollution, which confuses their signals. 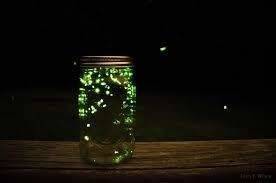 Here in the Yucatán we have seen them all months and we saw some in January on a warm evening.  We have even seen a few early in the morning in January. You will see more on a warm humid day in the summer.

Contributed by the Mayan Garden Club