Spider Monkeys live in the tropical forests of Central and South America from southern Mexico to Brazil.  They are critically endangered and at extremely high risk of extinction due in part to logging and deforestation which removes the tall trees the Spider Monkeys depend on and call home.  Their low maturation and reproduction rates of 1 offspring every 2 to 5 years also contribute to their vulnerability.

They are acrobatic and swift with long arms and gripping tails allowing them to gracefully move from branch to branch and tree to tree with a one-arm stride of up to 40 feet.  While suspended by their tails, they look like spiders – hence their common name Spider Monkey.  They live mainly in the top of the tree canopy and seldom come to the ground.  Spider Monkeys are often seen hanging by their tails and reaching out for food with their hands.  Their diet consists primarily of fruits and seeds but they will also eat leaves, bird eggs, and spiders.  Spider Monkeys consume large quantities of food over a relatively short period of time, eating while hanging, climbing or moving from branch to branch, tree to tree.  They do not bring food to another location to be eaten.

These social animals gather and live in bands of as many as 35 with females having a more active leading role than males. They will split up in smaller groups for daytime foraging as well as for sleeping at night.   They can be noisy, communicating with many calls, screeches and other sounds.  The male of the species defend the band’s range by marking their territory with secretions from chest glands.  If threatened by anyone stumbling into their territory, Spider Monkeys will welcome them with screams, barks, rattling branches and thrown branches or feces.  Recent intelligence comparison studies have shown the Spider Monkeys to be the most intelligent of the New World monkeys, with intelligence slightly above that of the gorillas.

The gestation period of the Spider Monkey is about 7 – 8 months.  Typically, females give birth to only a single baby every two to five years.  Babies are completely dependent on their mothers for the first 10 weeks after which they start exploring on their own and play amongst themselves.  The only one to look after the young, the mother continues to care for them through the first year of their lives.  At about 5 months of age, the offspring will start riding on the mother’s back, wrapping its tail around hers for additional safety.  For the first 2 years or so, the young monkeys are dependent on the mother’s breast milk.  In the wild, the Spider Monkey has a life expectancy of approximately 27years.  This increases 33 years in captivity. 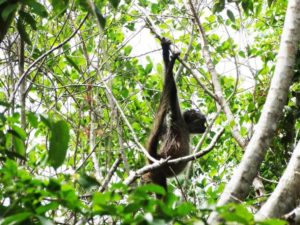 With its body of 38 – 48 centimeters in length and a tail measuring 63 – 82 centimeters, the male Spider Monkey is shorter than the female whose body and tail measure  42 – 57 centimeters and 75 – 92 centimeters respectively.   However, the male is heavier, weighing around 9 – 10 kilograms and the female weighing 6 – 8 kilograms.  Males and females are very similar in appearance with coarse, stringy hair and no under fur.  Spider Monkey’s fur can be black, brown, golden, buff or red.   Their long and narrow hands and feel are feet generally black.  Their hands are hook-shaped with long with narrow palms, long curved fingers and no thumbs. Their feet are very long with a grabbing big toe which allows them to grab smaller branches and have a better grip while walking upright on broad branches.   At times, the monkey will use it tail as a third limb while standing upright on branches or to hold on to a support while standing or walking on two feet.  Their heads are small with prominent muzzles.  These primates are highly dependent on their keen binocular vision.