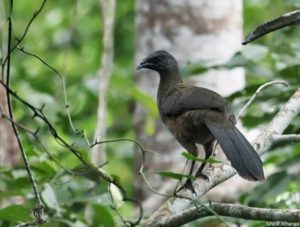 What’s that really loud, horrible, awful honking noise you sometimes hear from the jungle so early in the morning? It’s the call of a very unassuming (but noisy) bird, the plain chachalaca. If you haven’t had the pleasure of its dulcet tones waking you up after a long night of tequila shots, here’s an example of its sound:

The chachalaca lives almost exclusively in trees, and it’s sometimes referred to as the Mexican Tree Pheasant. The birds like to run along large limbs through the treetops or on interior branches, feeding on leaves, berries, and seeds. Birds live together in flocks of 15 or so, and they like to feed in loose flocks of 4-6, selecting the ripest fruits available; sometimes they are seen feeding in precarious positions, including upside-down.

They are quite plain in appearance, with brown feathers, and as adults, they are usually about the size of a large chicken. They are not elegant fliers; they move in short bursts as they move from tree to tree, sometimes to the ground if there’s food to be had.

They may not be very pretty, and they will not impress you with elegant flight, but their calls will certainly get your attention!