Plumerias (commonly called frangipanis) are considered by  to be the most beautiful and fragrant trees in the plant world. They are all natives of the New World tropics. The word plumeria connotes perfume. The genus consists of  7 species and over 200 named varieties. From their native habitat in the American tropics, they have been introduced to all tropical areas of the world with great success. Plumeria flowers are what most leis are made of in Hawaii.

Their growth habits, shape and leaf and floral beauty are unrivaled among trees. Depending on the specie, their height may average from 12-15 ft, up to  25-30 feet.    There are also a few dwarf varieties which average only 6-8 feet.  In general, the taller growing varieties require more sun and bloom fewer months of the year.

Of the 200+ named varieties, the fragrances of plumeria flowers are can smell like coconut to jasmine and including citrus, rose, honeysuckle, raspberry, spice, apricot, peach…or even none at all. Flower color varies from pure white to deep red with yellows, golds, oranges, roses, pinks and all combinations in between. In the collector’s world, the most sought after plumeria is a super dwarf, highly spiced and with a variegated pink and orange bloom.

Plumeria are very easy to grow, with very few insect or disease problems.   In tropical areas, such as the Yucatan, they can be planted permanently outside.   They are cold hardy to 38°F, or zone 10.   Below this, they will freeze and rot. They prefer full sun, but will tolerate moderate shade, and are willing to be understory trees.

Plumerias are also tolerant of many soil types, including alkaline, coral-based soils, and they can tolerate highly mineral water. It will not grow on the beach. However, in these environments, it requires soil amendments during planting, and protection from sea winds.

One of the unique aspects of the plumeria is that it likes to go dormant for at least several weeks each year. In tropical climates, this usually occurs in mid to late January, when the leaves develop a yellow fungus, after which they lose their leaves.   There is no need to spray the leaves, this is the part of their cycle.

The need for dormancy in the plumeria, makes it a very easy tropical plant to grow in colder climates. When the night temperatures dip to 40 degrees F, simply defoliate the plant and place it in a temperature protected space for the next several months.  Garages work wonderfully for this.    The plant can be either potted or barerooted.

Finally, plumerias, are wonderful to share with gardening friends.   Simply cut off a non-blooming branch, and de-foliate the leaves (note the sap is sticky).    Let the cut end dry a few days, and then plant or share! 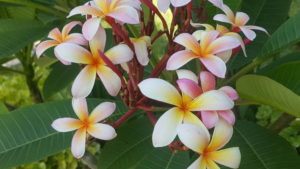