Out Our Backdoor   and a Recipe for Adventuresome Souls 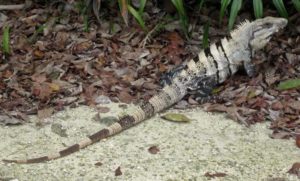 When you walk or drive around our part of the world, if you see rocks in the sun or a lightly travelled road, there will probably be an iguana or two hanging out, soaking up the rays. As cold-blooded reptiles, they need plenty of sun to regulate their own body temperatures.

In Quintana Roo, we have green iguanas, even though they may appear to be in colors other than green; usually we see them in grey with black stripes. In fact, the coloration and patterning of iguanas can change, similar to chameleons but at a slower rate, and this helps them hide from predators. They shed approximately four times per year, with their skin flaking off in bits and pieces at time.

Primarily herbivores, iguanas are active during the day, feeding on leaves, flowers, and fruit. Iguanas’ stout build gives them a clumsy look, but they can move fast on land and they are excellent swimmers. They have strong jaws with razor-sharp teeth and sharp tails, which make up half their body length and can be used as whips to drive off predators. They can also detach their tails if they’re caught, and will grow another without permanent damage, even though a re-grown tail is never as pretty as the original; it kind of look like a rat’s tail!

Iguanas can get as large as 5 to 6 feet, including their tail, but we’ve only ever seen them anywhere that large on Isla Mujeres. Due to predators and their penchant for hanging out on roads, they rarely seem to get larger than three or so feet long.

In some places of the world, including South Florida, USA, iguanas are pests. They are a traditional food source, and in that spirit, we’ve included a traditional Mexican recipe for cooked iguana. ¡Provecho!

Let us know what you think!