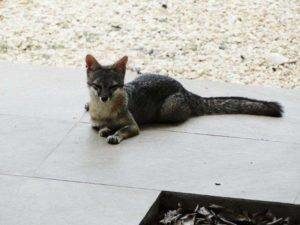 The fully grown gray fox has a mix of white, red black and grey fur, while the new born pups are brownish-black. The reddish-brown markings on its sides, chest, and back of its head cause it to be frequently mistaken for a red fox.

The adult gray fox weighs 7 – 13 lbs. The female gray fox is slightly smaller than the male, which can be as long as 40 inches, including a 12-inch long, bushy tail with a black stripe on top. Other characteristics of this beautiful animal include an long body, relatively short legs, pointed ears, pointed muzzle, and long hooked claws. They are nocturnal and have a yapping bark.

The gray fox is found from southern Canada to northern Columbia and Venezuela. There are sixteen subspecies of gray fox; those that live in the Yucatan belong to the fraterculus subspecies. 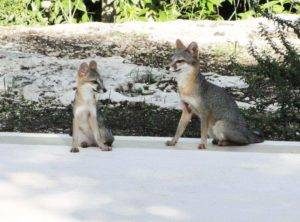 The mating season is from January to April. Usually, the same male and female will mate together every year. After a gestation period of about 63 days, the female gray fox gives birth to 1 to 7 pups. Both parents provide food and train the babies. The pups will nurse for 2 to 3 months and will be able to hunt on their own by the time they reach 4 months of age. The young will stay with their parents until fall.

The gray fox often makes its den in rocky crevices, caves, hollow logs, and trees, but generally only use their dens during mating season and while raising pups. 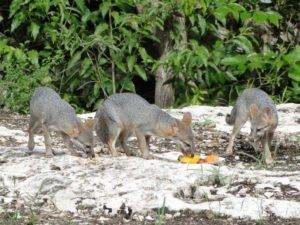 A solitary hunter, the gray fox eats a variety of foods with the mainstays being mice, rats and rabbits. However, it will supplement its diet with small birds, reptiles, insects as well as plants such as corn, fruits, berries and grass. 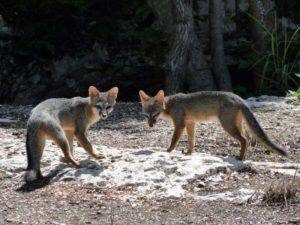