LOCUSTS Ahead, Duck and Run For Cover

Perhaps you noticed, a few weeks ago, a sudden influx into our area of very large grasshoppers, flying through the air, chomping on your plants, dying in the radiator grill of your car. They’re locusts, and the locals call them “langostas” (lobsters), even though they’re not quite that delicious.

Until the 1920s, it was believed that grasshoppers and locusts were entirely different species, because they look and behave so differently. What was discovered in 2009 is that in times of ecological stress – usually a rainy season when populations explode, followed by a dry season of low food supply –serotonin in the grasshoppers gets tripped, changing them into stronger, more aggressive, swarm-forming locusts; “super grasshoppers”. What’s also interesting is that the offspring of locusts that are born while swarming are swarmers; they don’t change back into “regular” grasshoppers.

As they are very destructive to farms and to gardens, we have been relieved that the locusts appear to be going away…at least until the next serotonin surge comes along. Here is a palm after the locusts landed. 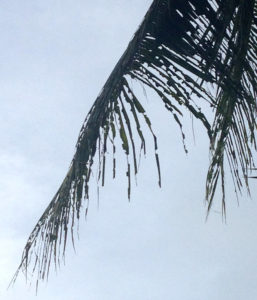